Between February 2014 and February 2017, Vizio collected information about customer viewing habits through their Vizio Smart TVs, and sold that information, all without clearly disclosing the nature of their collection or disclosure to their paying customers. As a result, there is a class action lawsuit against Vizio:

“The lawsuit alleges VIZIO violated privacy laws and consumer-protection laws by collecting sensitive information about what was displayed on certain VIZIO Smart TVs during the time period above for sale to advertisers. The lawsuit also alleges VIZIO did this without the consent or knowledge of persons who bought these TVs. VIZIO denies these allegations.”

Now, I’m not a lawyer, so I have no idea whether what they did “violated privacy laws and consumer-protection laws.” Given that the United States doesn’t really have well-established data privacy laws, I wouldn’t be surprised to learn that Vizio did nothing that technically breaks the law; how do you break a law that doesn’t exist?

Note, of course, that none of the above discusses whether or not what Vizio did was wrong.

But I should back up a bit. Why do I care about this? I own a Vizio TV. One day last week, I turned my TV on to use the Pandora app, intending to listen to some music while working on my computer. Instead of a simple experience of turning on, tuning in, and rocking out, I was instead presented with this message:

Well. That’s just lovely. My response on Twitter was none too gentle:

“Hey @Verizon @verizonmedia @AOL @Yahoo @VIZIO, when a person turns on their TV, they shouldn’t be forced to surrender their rights to use the device they paid for. The only reason to demand such is you intend to abuse user privacy. How about you go fuck yourself?”

Note the distinct lack of any kind of “opt out” option on that message. It is stating very explicitly that continuing to use their services is accepting their terms, and surrendering your rights. This kind of anti-consumer activity by big companies rather obviously angers me. Fortunately I had an old AppleTV laying around, and I turned that on and got it set up. Within minutes I was faced with a very different kind of prompt:

“To the people at OATH, this is literally all you had to do to not create an adversarial relationship with your customers. Take a page from the @AppleTV playbook”

I’m not an Apple fanboy, but of the monolithic tech companies we have today, they consistently seem to be the least data-hungry, and the most proactively responsible with disclosing data use, and in giving the consumer options with regards to sharing such data.

Setup complete, I proceeded to continue with my plan of listening to some good music while working from home, to worry over the Vizio TV another day.

Another Day, Another Message

The next day, turning on my TV again, I was faced with a different message. This one was no longer the “surrender your rights” notice that had remained on screen the entire day prior, but instead a notice regarding a class action lawsuit against Vizio, informing me that I may be part of the class, and could submit a claim at a specific URL. I don’t have a picture of that message, because it was on screen for no more than a minute or two before it went away, with no interaction from me. I was literally picking up my phone to take a picture when the message vanished from the screen.

Message 1: A no-choice notice that you are surrendering your rights by using the service. The message does not go away without the user clicking to effectively “accept” it.

Message 2: Information educating the consumer about their rights and how to submit a claim in the class-action, displayed briefly, then automatically vanishing from the display.

So, to be very clear, I have since factory-reset my Vizio TV and taken it off my wireless network. I will no longer be using the “Smart TV” features of the device, because I do not intend to accept Vizio’s (or OATH’s, or whoever the hell they are now) terms of service with regards to “mutual arbitration” and a “class action waiver.”

So, what next? Well, I searched and found the website of the class action suit. The domain is registered through GoDaddy, so that doesn’t help much with confirming who runs it. Looking further on the site, it appears to be set up by an organization called A.B. Data, Ltd. I’m not entirely clear if they set this up on behalf of Vizio or the class representatives.

Looking into the site and the information presented on it is a rabbit hole all on its own. The following is my own brief - and, spoilers, demoralizing - adventure into that rabbit hole.

Let’s start at the top: 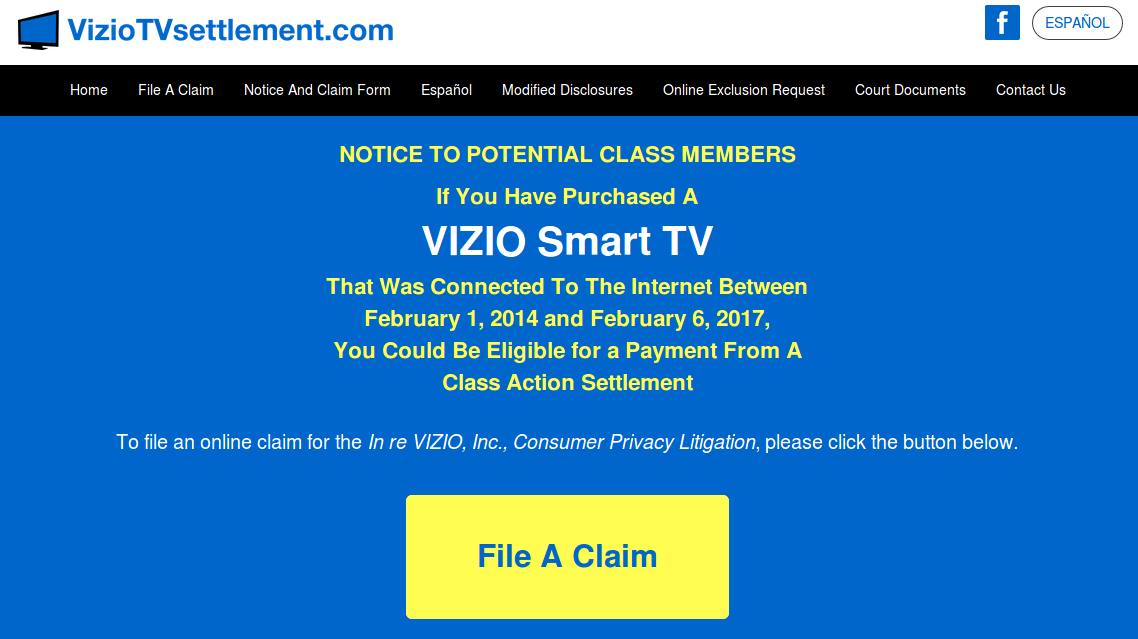 Ok, so… informative. No accounting for taste, on the colors, but it does grab the attention. Let’s see… what’s this about a claim..?

$13 to $31 for violating my privacy and running a morally ambiguous (at best) business practice, ok… seems a bit light… But, hey, what can we expect in a country that doesn’t care about protecting the data privacy of its citizens?

The page is a summary of the full notice, and it does suggest that readers should look at the full text… so let’s dive deeper. 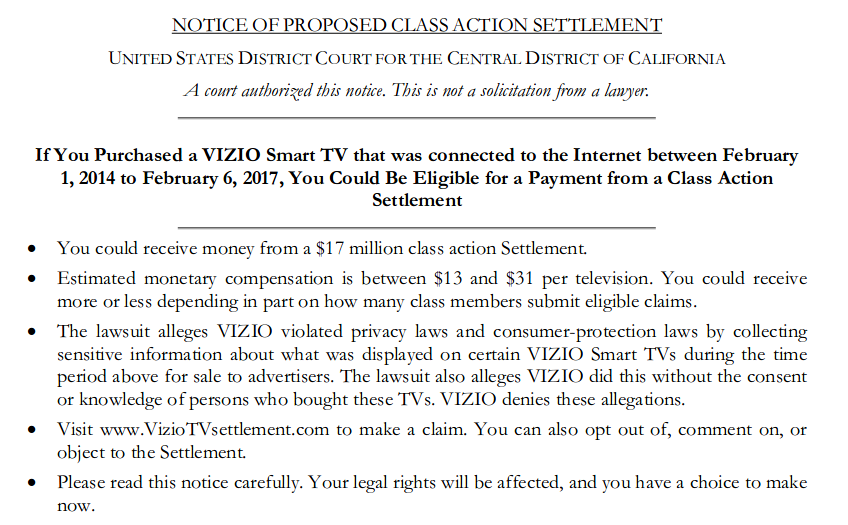 We get the summary information again, and then we get into the details of the choices available to a consumer: 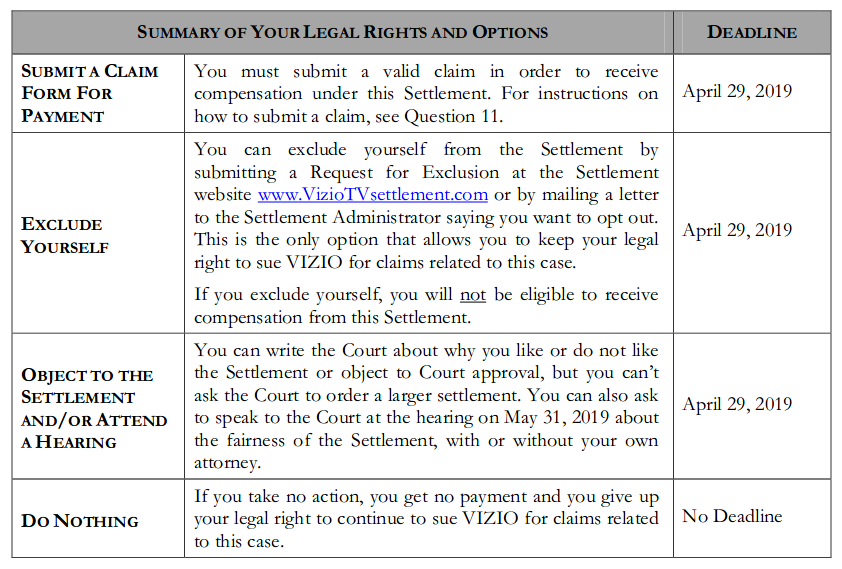 The document then goes into an FAQ-style list of answers to inquiries such as “What is this lawsuit about?” and “Why is there a settlement?”

Next, the important information on how to determine if you are a member of the affected class:

Huh. Only one purchaser per Smart TV per household may qualify to submit a claim. That seems… odd. Couldn’t multiple members of a household have had their privacy violated? My bullshit detectors start to warm up…

Next we get into some numbers:

Ok, $17 million into a fund… after lawyers get their cut (spoilers: it’s about 1/3 of the total, plus some more)… they expect that to be $13 to $31 per claim. I’m not sure how they determined the starting value of the fund, but maybe we will learn more.

(In other news: I should have gone to law school.)

Looks like Vizio also agreed to modify the disclosures to their customers with regards to data collection. A mock-up of the on-screen version of that disclosure has been released by Vizio: 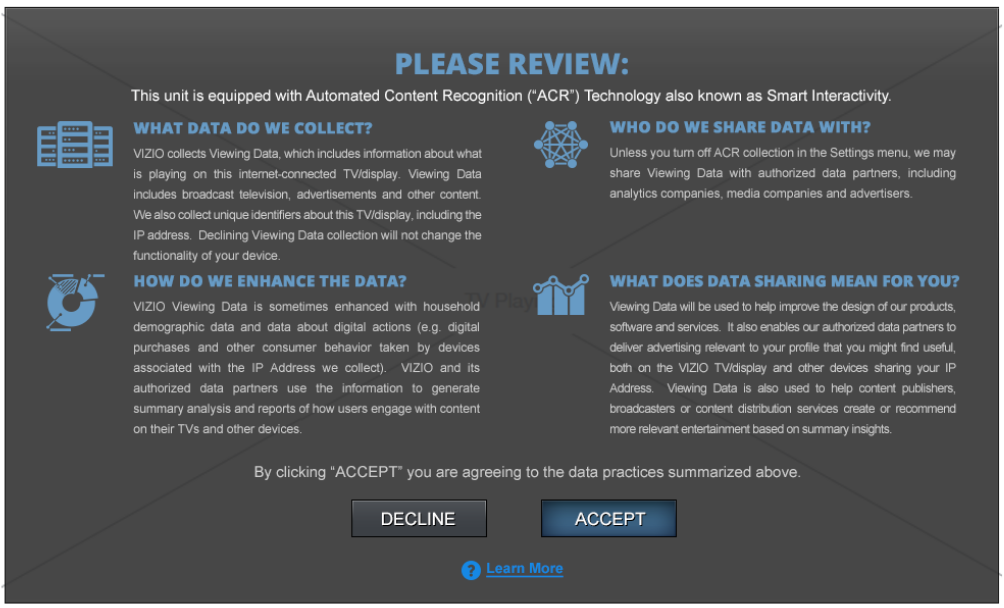 Vizio also agreed to delete all the data that was gathered during the noted window between 2014 and 2017. This is the first place my bullshit detectors start going off. Some important questions arise:

Next we have some clarifications on how to submit a claim in order to get your windfall of $13 - $31; some deadline information; and what happens to the money if there is more left after the payouts are processed.

Next comes the explanation of what an individual surrenders in order to remain in the class, by either doing nothing or submitting a claim:

There is information about the lawyers representing the class, then the information on how much money goes to the lawyers, and how much goes to each of the six plaintiffs who submitted the initial suits that were merged into the class action:

Next are instructions for excluding yourself from the class (which can be done digitally or via traditional mail), and more clarifications on the ins and outs of excluding vs. remaining.

Next is a full page of information on objecting to the settlement. This is where a larger issue than just Vizio being a shitty company comes into play: In order to give criticism to the court, an individual must remain in the class, thereby ostensibly legitimizing the class action. If one excludes from the class, they can not then also offer objections that the court will hear:

It gets even better, because if you stay in the class and wish to object, you can do so only via traditional mail. No modern methods for accepting input, here! Bullshit detectors #2. 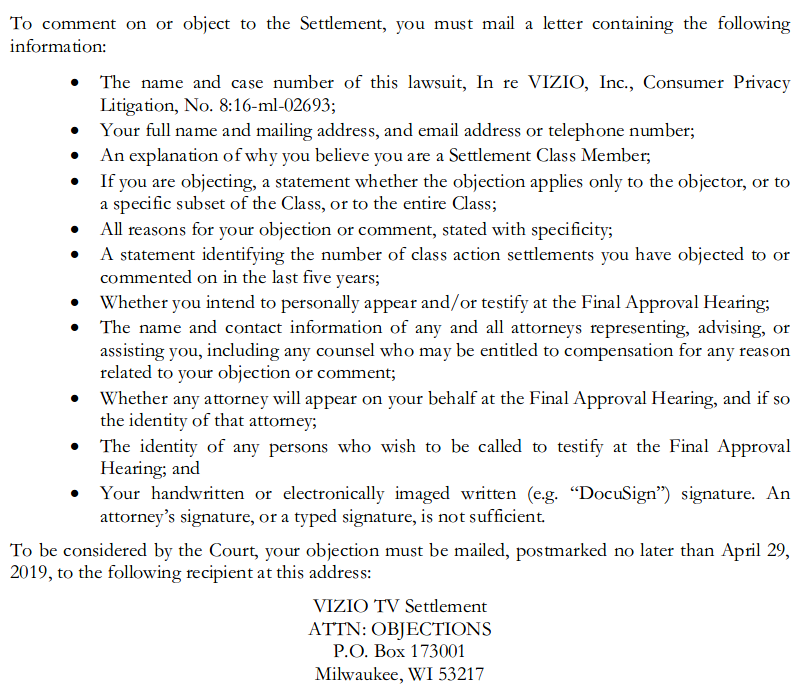 And finally, and most importantly, if you still have questions, as I do, a last page with instructions on how to get more information: 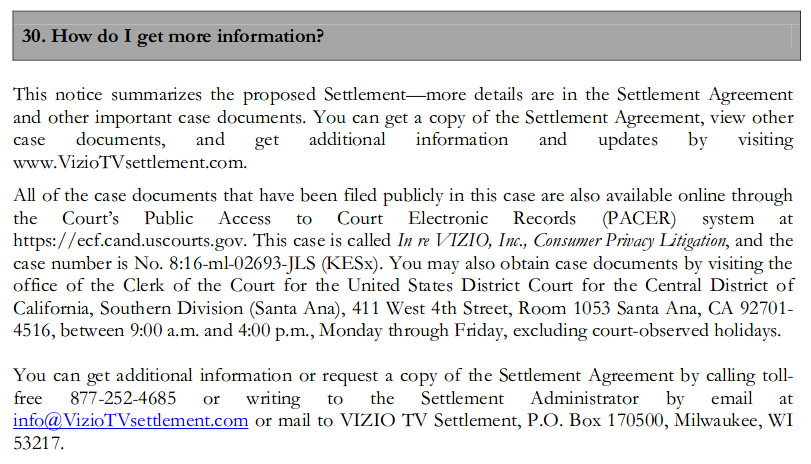 Down the Rabbit Hole

Ok, great! We have a URL (though not a link, you might notice) to the PACER system. Public access to court electronic records sounds like a good thing! I bet that will have answers to the outstanding questions re: how much benefit Vizio gained from the data they already sold, and how much it’s worth in today’s value. 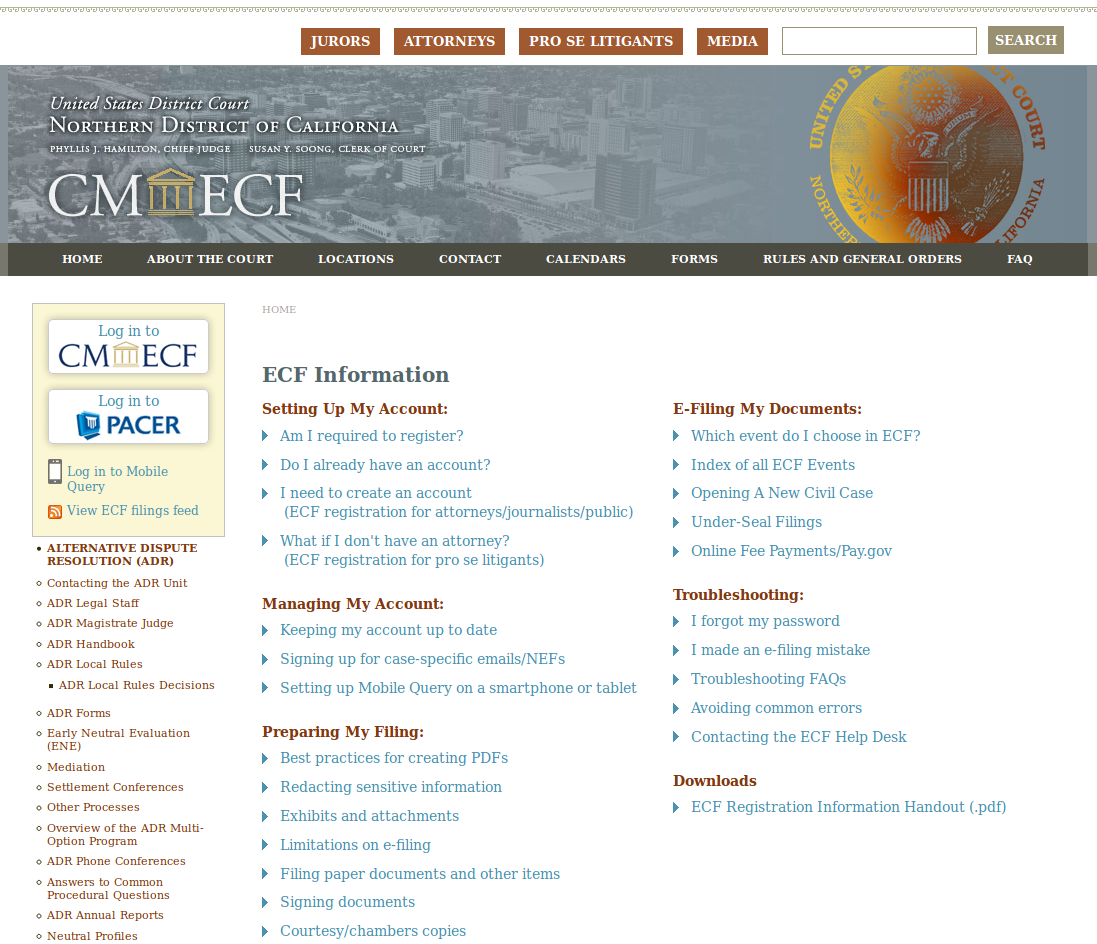 Oh… well, uh… I guess I’ll search for the case # provided, on this page…

Ok, this sounds promising. So I just need to go to the main PACER website… 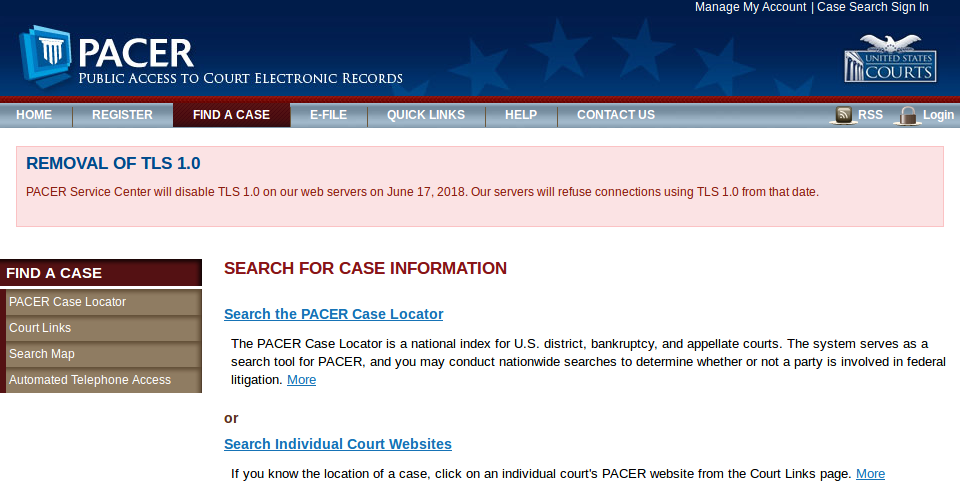 And I want to look up a case, so I guess I’ll use the Case Locator… 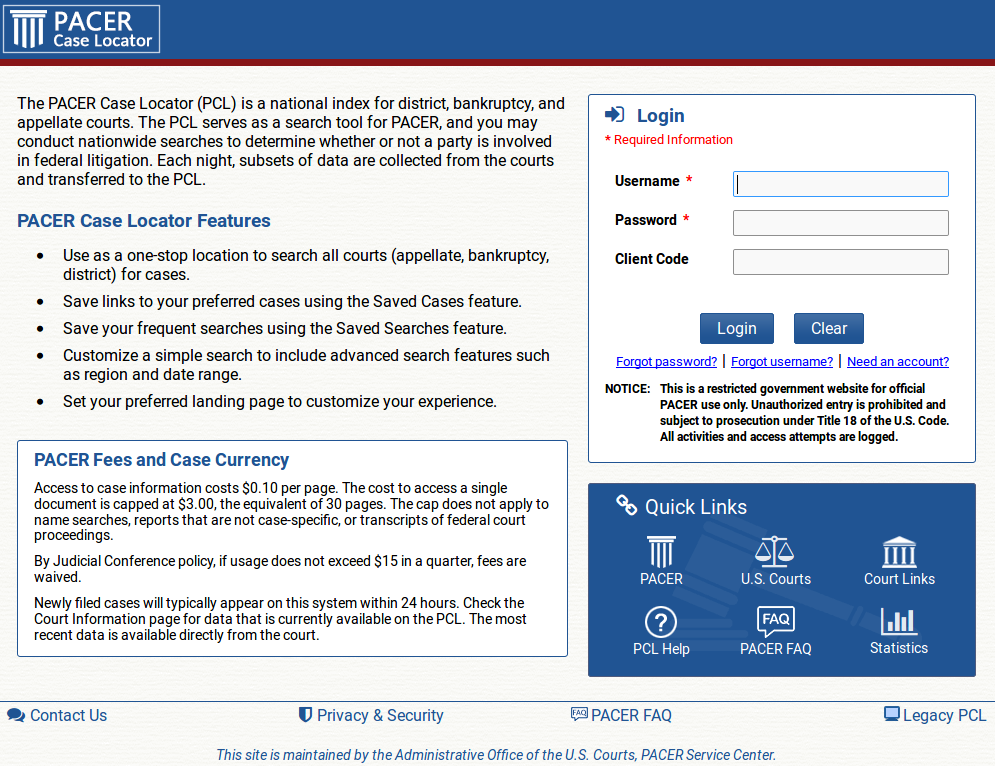 Oh… It’s not free. Huh. That seems a little weird for something with “Public Access” as the first words in its acronym… But ok, I guess maybe I chose the wrong option? I’ll go back and try searching an individual court website… 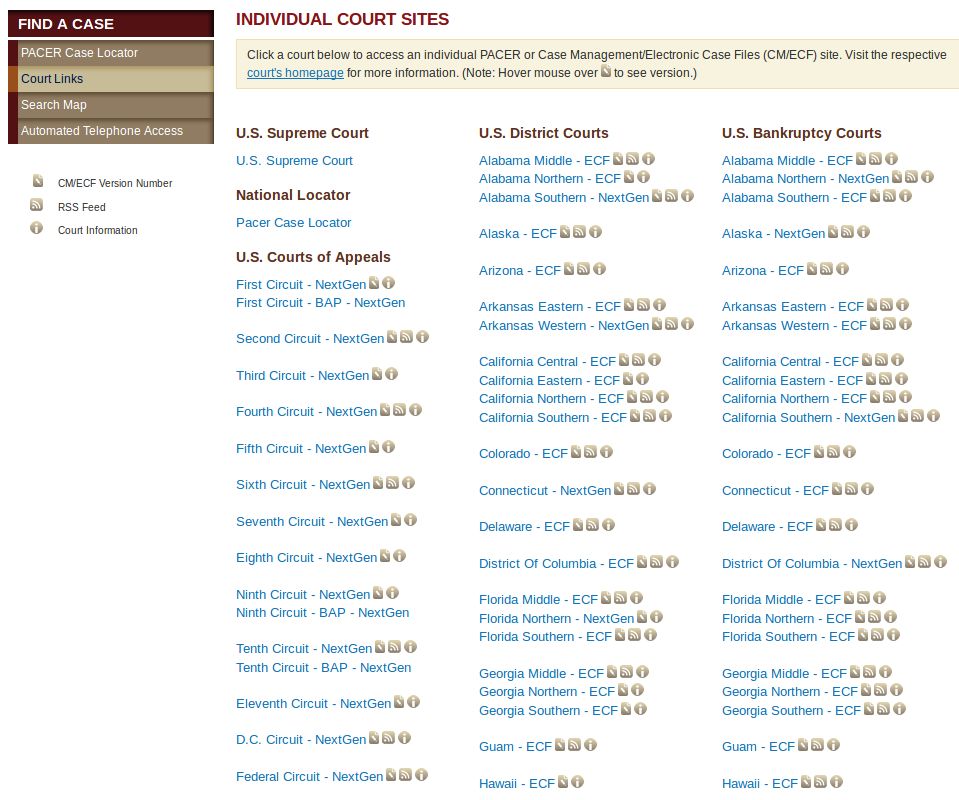 Boy, there sure are a lot of options… but I can handle this. I refer back to the class action notice, and it references the “United States District Court for the Central District of California, Southern Division (Santa Ana).” So let’s try the California Central ECF…

That is… not a pretty website. But I don’t need pretty. I just need functional. I’ll just load up the document filing system, and… oh…

Seriously? So apparently the court system is pay to play, not just for lawyers, but even for class members in a class action. Just to understand whether or not the proposed settlement is reasonable or based on valid value propositions, you have to pony up to learn the details.

There go those bullshit detectors, again.

My main takeaway from this whole process is that I can be automatically named into a class for which an action is brought, but I can’t access any of the arguments (on either side) relating to that action without paying my own money to request them.

Based on my own level of knowledge, there are some rather important details that bring the specifics of the proposed settlement into question, but I can’t even do my own research on the matter without ponying up for a service that is unironically named “Public Access” yet which is pay to play.

Dear god, I didn’t think it could get any worse! 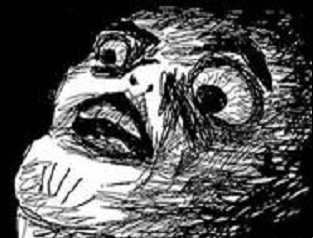