I am participating in the Brakesec Book Club (@Brakesec on twitter for more info). This time around is the Hacker Playbook 3 by Peter Kim.This post will serve as a hybrid of my personal notes, some insights based on my work experience, and a very informal book review, of sorts, mixed up into one.

Well, with the holiday and work and such going on, this post got pushed back, and is well overdue. The chapter 3 portion ended up being much more shorthand notes than the prior posts. I’m also merging it with my chapter 4 notes since both I and the book club are behind by a week.

The OWASP testing guide is a good reference. It is useful to a new webapp tester for learning initially, and once you know it fairly well you will streamline it to hit the most crucial parts in your tests for efficiency. When you aren’t finding common issues, referring back to the testing guide is valuable to look for other finding areas.

There is a Github checklist version linked later in chapter here.

I think this is based on the prior OWASP list, but it is still useful.

This tool is not covered in detail, instead being mentioned in passing. Learn this tool. Eric Conrad calls it “the buzzsaw” for SQL injection, and it really streamlines a lot. Learn the core concepts manually, but then use the buzzsaw for efficiency.

To add to the author’s recommendation on bug bounties, a good way to get involved and learn can be to start (or join) a team and work on a the bounty together, agreeing to split any reward (focus on the experience, not the reward). For that matter, do “free” bug bounties when just learning, since they are more likely to have undiscovered bugs.

This is found at buer.haus.

I am paranoid, but I would learn the format and do it manually. Don’t submit your bug details to a third party, even if it’s client-side processing.

Express syntax was completely new to me. I’m going to have to note these pages for if and when I run into express in the webapp of a real platform, as I find internalizing these kind of completely foreign new ideas is much easier with a real world implementation in front of me.

Another really good way to learn these platforms is just to build a site using one of them. For example, to learn markdown I built my blog, first using Ghost, then using Jekyll 🙂

This is brilliant. The full list of character mapping can be found here.

This will help better understand why the provided string does what it does, as will the readme of that github repo.

Deserialization, template injection, and XXE were also brand new to me and I need to review and study them further.

The majority of the time I use Burp to do this. It doesn’t automate multiple iterations, but I keep track of when I sprayed and manually enter the next password to test while I work on other external tasks. This is in part because I’m paranoid of locking accounts.

As indicated in the book, Responder is bread and butter. I use it on every internal pentest I run, and I use Inveigh on many of my internal and external pentests, depending on the network segmentation I encounter and the success I have in getting into the network from outside.

Multirelay is also gold for environments where you can’t crack passwords of privileged accounts. If SMB signing is not enabled and you are seeing privileged account hashes flying by, you can often get onto an interesting machine through this tool.

I’ve noticed that “stock” mimikatz gets caught pretty easily these days, as does nearly any powershell tool such as powerview. Mimikatz can at least be recompiled to obfuscate it, but the powershell tools are more difficult to hide from modern EDR systems.

All of my love goes to the development team behind Bloodhound. The tool has been gold since it originally debuted at Blackhat 2016, and it only gets better as they keep adding new features. The team is also really accessible to the community on their Slack.

Somehow I had forgotten how simple it is to tunnel any protocol via SSH to a VPS. The tip on using the -L flag is crucial for red teams maintaining versatile jump boxes in the cloud, being able to spin up and kill proxy hosts without exposing their true origin.

I found the diagrams and the descriptions provided in the book rather confusing for the final lab. While I was able to put together what each step was intended to represent, trying to simplify the various pieces into a lab with just 3 VM targets and a flat network actually made it harder to follow than if the real network infrastructure were in place. Obviously, virtualizing that infrastructure is the challenge, so sacrifices had to be made somewhere.

I drew up my own diagrams to better follow along what was being described in the text and how it would look in a real network environment.

This is a bit more realistic representation of what is being simulated, with DNS infrastructure being in the picture. Realistically, the attacker would also use at least two (maybe three) boxes: one the actual attacker station, the second a VPS to tunnel things through, in case the attack gets detected. The attacker might also use a third box for DNS responses. 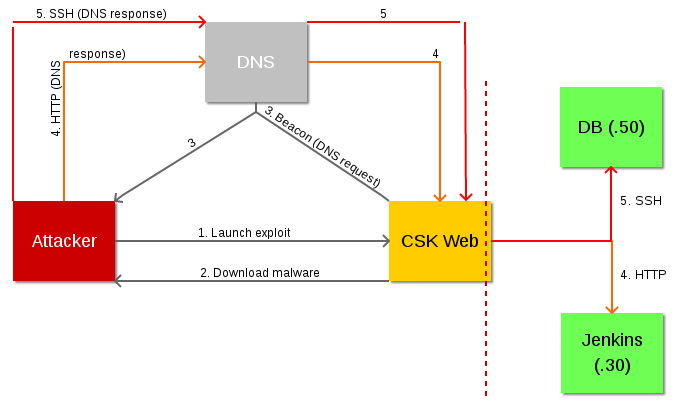 There is a ton of content in this chapter, and I’ve only scratched the surface of it.